Rekordbox 6 The Next DJ Music Revolution

Pioneer DJ just launched the latest version of its Rekordbox music management and DJ performance software. And while there are interface tweaks, a new tiered subscription that includes both free and paid options, and Ableton Link compatibility with other Link-enabled apps, easily the biggest new feature here is the Cloud Library Sync.

Once done, DJs can then choose to export their music to a thumb drive for spinning with media players in the time-honoured way, or DJ with them directly from laptop or phone.

In this piece we’ll explore closely Cloud Library Sync works and why when we look back on this day, we’ll likely realise it was the one feature that changed DJing from this day forward. We’ll also take a brief look at the new Rekordbox 6 interface and its new subscription model to round out our summary of what this update brings to the table.

Rekordbox 6 is the first DJ app that lets you sync your library to the cloud. It works with Dropbox (for your actual tracks), and Pioneer DJ’s own servers (for your metadata), although to the end user this differentiation is not visible or important.

What this means is you can upload your Rekordbox library from your hard drive using Rekordbox, and you can access it using Rekordbox on your laptop – all you need is to have Dropbox installed and Cloud Library Sync enabled, and it does all the managing automatically. You can also access Cloud Library using the Rekordbox app on your iPhone, though you will have to manually download the songs you want to work with.

Either way, any changes you make to track metadata like hot cues and loops get synced with your cloud library automatically.

How does it manage my music files?

When you’re setting up Cloud Library Sync, what Rekordbox does is it places your music in a special Dropbox folder on your hard drive. This special folder syncs with your Dropbox account in the cloud.

It’s important to note that the special Dropbox folder and the files in it exist on your hard drive too, and that they take up space just like any other folder or file on your computer. By default, it is NOT an online-only folder.

Once your songs are in this Dropbox folder, that means you can access them using any other computer running Rekordbox 6 – you just need Cloud Library Sync activated, and you need to have the Dropbox app installed on that computer.

Cloud Library Sync is practical for a variety of reasons. First, you can create and edit playlists and prep tracks on the move using Rekordbox for iOS, or indeed any computer wherever you are as long as you’re able to install Rekordbox and Dropbox on it (you can authorise up to four devices in the Creative subscription). You also need to have an internet connection for these changes to sync.

This was the use case scenario for Traktor in the early 2010s. You could access your library, prep tracks and playlists using Traktor DJ on your iPhone, which then syncs with the Traktor library you had on your laptop. That feature was discontinued shortly thereafter, and never made it back to Traktor. Rekordbox users are now able to get a taste of that, and so much more.

Become a Rekordbox ninja – get the course: Rekordbox Made Easy

Second, using Cloud Library Sync means that you’ve always got an up-to-date “offsite” backup of your DJ library. If your DJ laptop breaks, gets stolen, or you accidentally wipe your hard drive (harder to do now than in the past, but it still happens) you can simply re-download your DJ library and get back on your feet straight away.

Rekordbox 6 comes with minor improvements to its interface: you now have icons at the top of the screen for toggling FX, the Sampler, the mixer, and recorder. The waveforms look like a mashup of Denon DJ and Virtual DJ waveforms: the smaller “overview” waveform looks similar to what you’d find in Virtual DJ 2020 as well as on a CDJ / XDJ screen, while the full waveform looks like what you’d see on a Denon DJ Prime screen, except you don’t see any of the bright green associated with Denon DJ.

The important thing about the waveforms is that they now let you clearly see low, mid and high frequencies in a way they didn’t before. 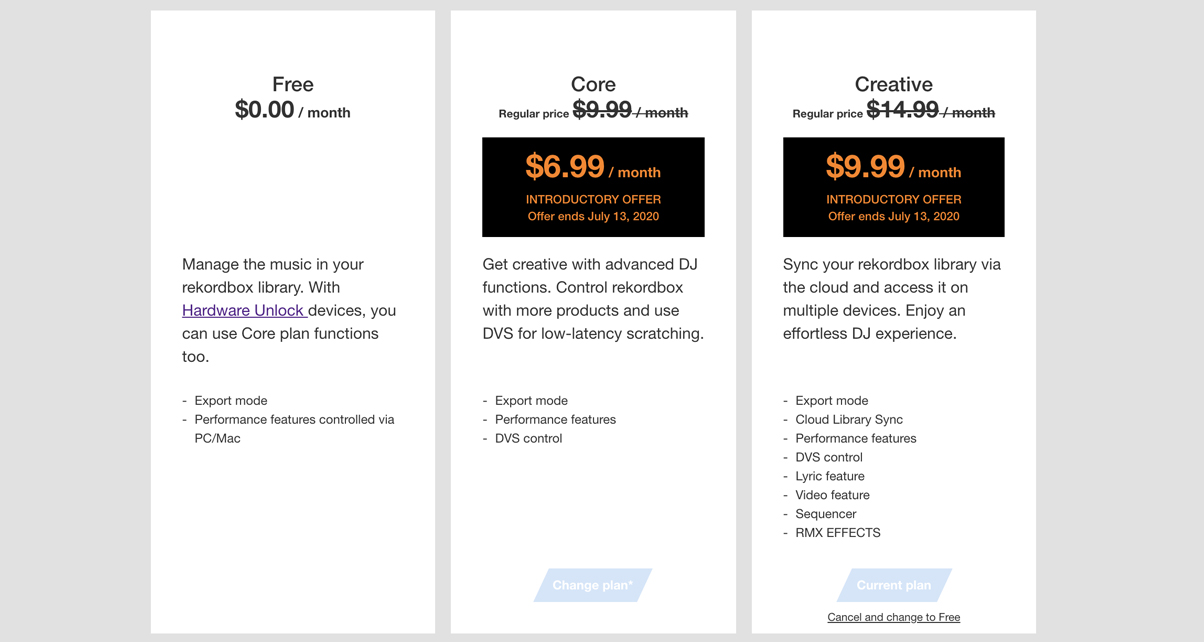 Easily the most contentious part of the offering. Rekordbox 6 now comes with three subscription options: Free, Core (which costs US$9.99/month), and Creative, (which costs US$14.99/month). There are discounts locked in for anyone who subscribes before 13 July 2020.

Free comes with both Export and Performance mode, though Performance mode is limited to Pioneer DJ hardware that can unlock it, which tend to be more recent kit. The list of hardware includes DDJ controllers, XDJ all-in-one systems, and cheaper DJM mixers like the DJM-750MK2 and DJM-450.

Noticeably absent in the Free tier (and one that could possibly irk club DJs) is Performance Mode compatibility with CDJ / XDJ media players as well as club-standard DJM mixers including the DJM-900NXS2.

This is where the Core tier comes in. It has everything Free has, plus the ability to spin with CDJs/XDJ media players and other DJM mixers in Performance Mode. DJs who spin with Rekordbox DVS will also have to subscribe to Core because DVS control isn’t available in the Free subscription.

Finally, the Creative tier is the priciest but also comes with the most features. You get all that Core has, plus you also get the new Cloud Library Sync feature and other Rekordbox DJ add-ons that you had to purchase separately in the past, such as Rekordbox Lyric, Rekordbox Video, and the RMX Effects.

Which one is right for me?

If you’re a hobbyist, or a gigging DJ who bought a DDJ controller or an XDJ all-in-one system, the Free subscription will work fine. This is especially true if you are coming from Rekordbox 5 since there is practically no change in the way that the software will work for you – unless you’ve got any of the other Rekordbox DJ add-ons that you absolutely must use in your DJing (eg Rekordbox Video).

If you’re a club DJ who spins with a CDJ/DJM set-up using a laptop, or a battle DJ who uses turntables and DVS, Core will be your first choice.

If you want all that Rekordbox has to offer, including the new Cloud Library Sync feature and all the other bells and whistles that used to be Rekordbox DJ add-ons, Creative is what you’ll want to take a look at. 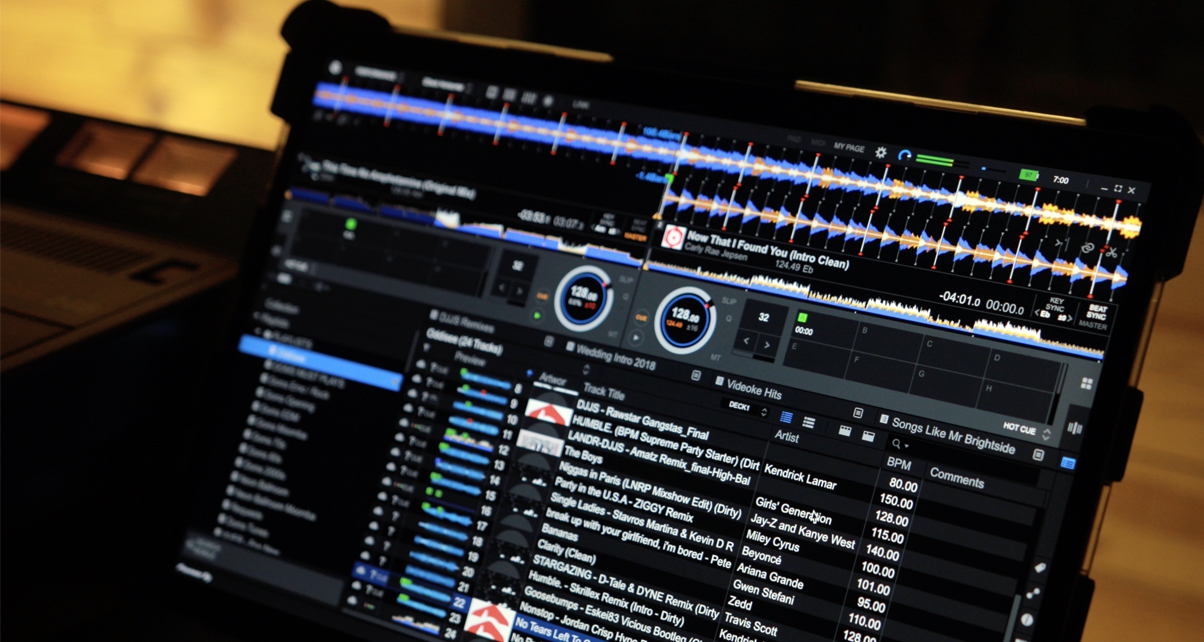 Rekordbox 6 is a pivotal iteration of the app because it’s the first time that Pioneer DJ has taken the lead in software in a long time – and the fact that cloud integration is where it’s taken that lead is a coup for the company. Think of how photos are kept and synced in the cloud for many of use from our phones and so on – they are still “ours”, but we use services from Apple, Google and the like to keep them safely away from our local devices, at least as far as the “master” copy goes. That’s what Pioneer DJ is ushering in here, but for your OWNED music.

It wasn’t long ago that Rekordbox was a basic music management app (that many DJs who DJed on Pioneer DJ gear didn’t even bother to use, preferring to DJ just from MP3s on USB sticks, unanalysed). Then it was thrust onto the performance DJ stage as Rekordbox DJ as a pretty unimpressive app that basically pinched functionality from the other major DJ apps like Serato, Virtual DJ and Traktor.

It’s been improving ever since, but this version is “the one”. With this release, it has leapfrogged the competition and provided a new, compelling (and keeping in step with all things Pioneer DJ – pricey) innovation in the form of the mobile device-friendly Cloud Library Sync, which is something that will likely be copied by other DJ software manufacturers at some point.

One can’t help but think that Cloud Library Sync in Rekordbox is just one part of a much larger equation that involves more key pieces of the Pioneer DJ ecosystem. To not have an upcoming CDJ/XDJ media player with built-in WiFi that accesses Cloud Library would be frankly surprising.

Perhaps we are closer than we think to that future of DJing where you can just turn up with a pair of headphones, log in to your account on a CDJ, and start spinning with YOUR music and music from streaming services, too.

To be clear: Most DJs won’t use the cloud features, at least at first. Indeed, many Rekordbox users flat-out don’t like what they’re seeing here (the fact that it is tied to a subscription hasn’t helped, especially in these times). But even though it will take a while for what this software introduces to reach “tipping point”, it will. Other apps will follow. Cloud music will become the new norm. And Rekordbox did it first.

Manila-based Joey Santos is the Managing Editor of Digital DJ Tips. A DJ since 1999, he ran a successful recording studio for many years, and is a music producer and sound engineer too. He is the tutor for our Dance Music Formula and Music Production For DJs courses.